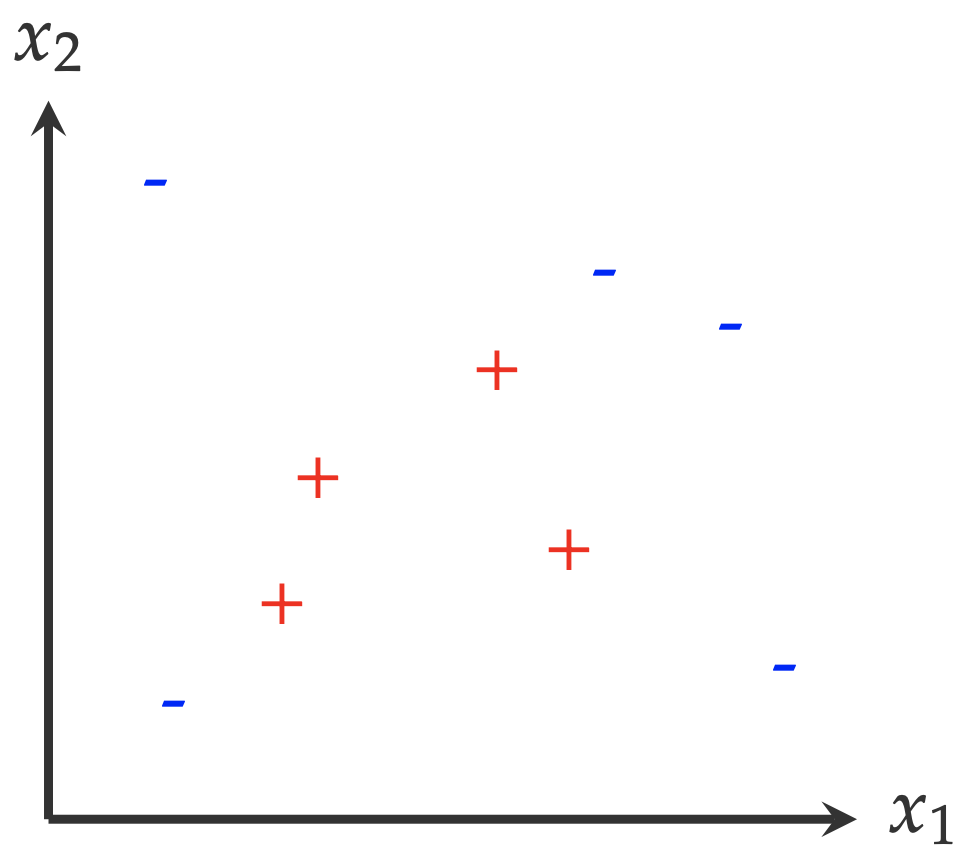 With that assumption, we can move forward to answer the question in two steps:

In future lectures, we are going to mention the keyword assumption many times. This is a key to understanding machine learning (and statistical modeling). In other words, using machine learning to solve problems, we have to start from certain assumptions to move forward, either explicitly or implicitly.

In this section, we will give a formal discussion on some phenomena in machine learning. The starting point of this discussion is to connect the first three concepts discussed in the previous section:

Although this is by no means the actual data generation process where we collect data in machine learning practice, this over-simplified hypothetical process provides us a way to both clarify some concepts and design further examples for discussion. Later, with the probabilistic language, it can also be used a powerful probabilistic modeling strategy, called generative modeling.

Example (Mixture of Gaussians): Assume the data distribution \( \mathcal{D} \) over the domain set \( \mathcal{X} \) is defined as

The following figure shows the histogram of sampled examples, with examples in each class following a Gaussian distribution. Note that, with the defined mean and variance values, it is unavoidable to have overlapped areas between these two classes. 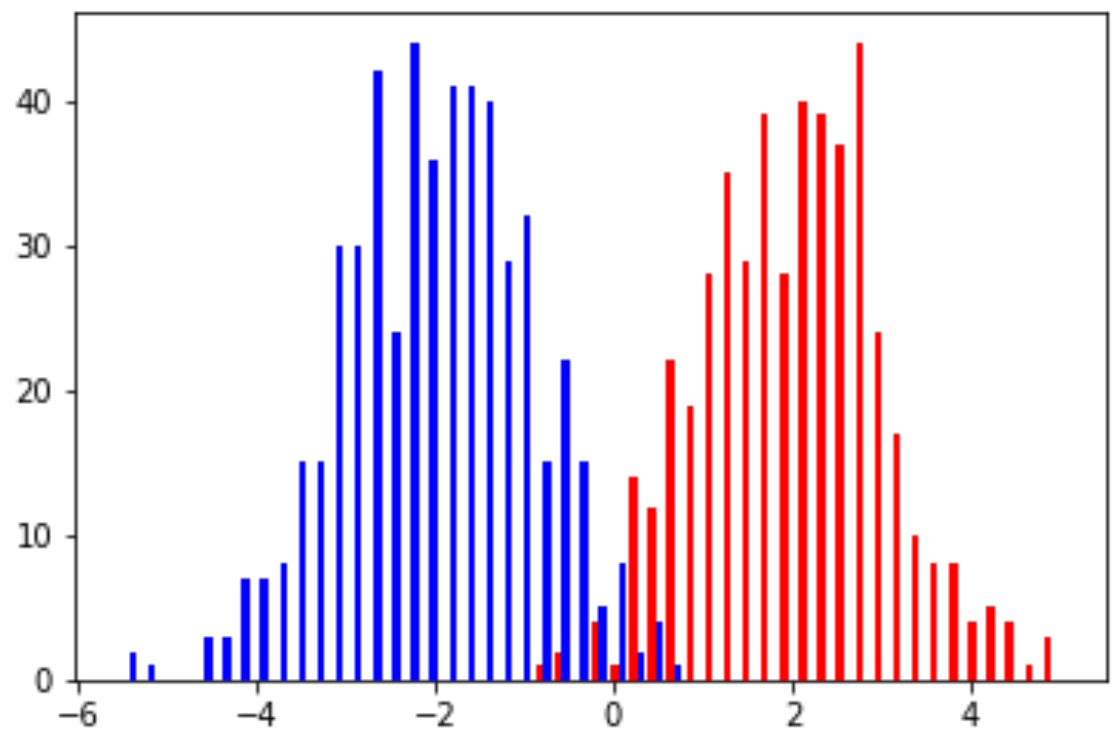 In the following sections, we will continue our discussion from the aspect of learning, which involves the last two concepts that we discussed in the previous section

Recall the definition of a machine learner:

To continue our discussion, we need to explain what is an optimal hypothesis? In other words, what are the criteria of optimality when finding a hypothesis from a given class \(\mathcal{H}\)?

For a given hypothesis \(h\), a classification error on \(x\) is defined as the mismatch between the prediction from hypothesis \(h\) and from the labeling function \(f\),

In general, the error of a classifier is defined as the probability of classification error on a randomly generated example \(x\in\mathcal{X}\)

The intuitive explanation of the right-hand side of this definition is that, for a randomly sampled \(x\) from the distribution \(\mathcal{D}\), the probability that \(h(x)\) and \(f(x)\) do not match.

Note that, the error of a classifier \(L_{\mathcal{D},f}(h)\) is measured with respect to the “true” data distribution \(\mathcal{D}\) and the “true” labeling function \(f\). Therefore, it is also called true error (or true risk). From a machine learning perspective, it measures how the hypothesis \(h\), selected from limited training example \(S\), performs on the whole domain set \(\mathcal{X}\). Therefore, this error sometimes is also called the generalization error.

Example (Mixture of Gaussians, Cont.): Continue the previous example with two components of Gaussian distributions. Also, assume we have the same labeling function \(f\). The data distribution can be shown in the following figure, with red indicating positive label and blue indicating negative label. 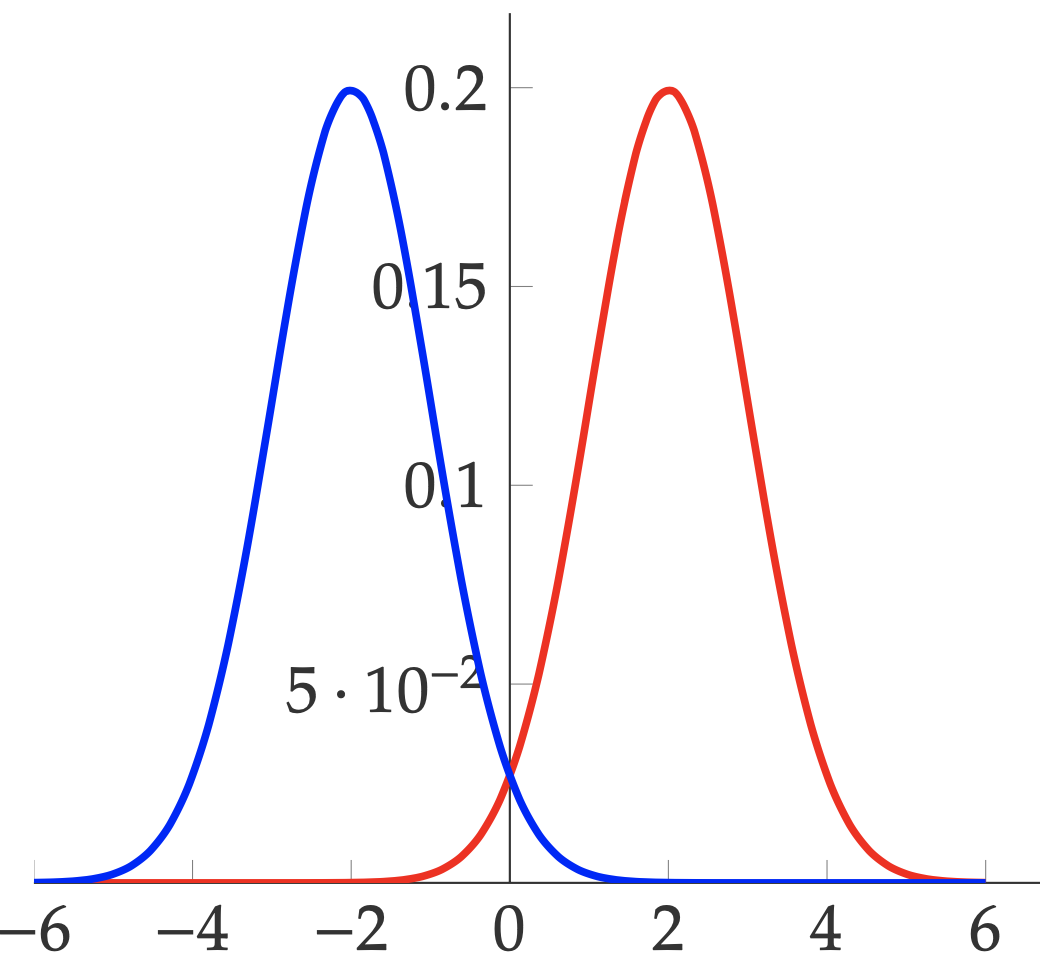 If hypothesis \(h\) is defined as

Note that the definition of true risk indicates it is not operational. Recall that, the definition \(L_{\mathcal{D}, f}(h)\) relies two factors: (i) the true data distribution \(\mathcal{D}\) and (ii) the labeling function \(f\). However, both of them are unknown. As in machine learning, the only thing we know is the training set \(S\). Therefore, we need the empirical risk \(L_{S}(h)\) as an approximation to the true risk \(L_{\mathcal{D}, f}(h)\).

The definition of the empirical risk (or empirical error, training error) is defined as

Example (Mixture of Gaussians, Cont.): For the hypothesis \(h\) defined in the previous example, the empirical error is the ratio between 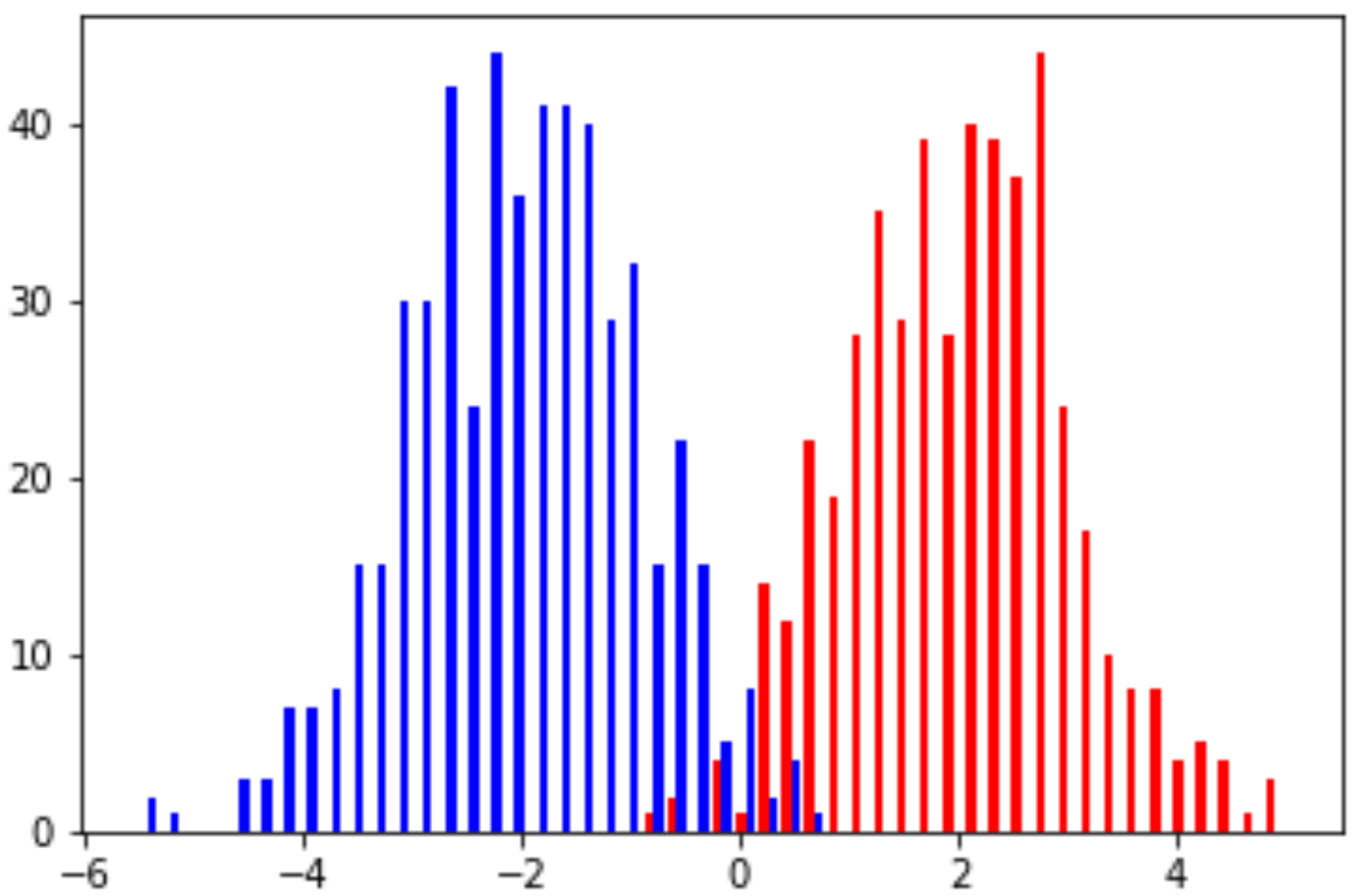 After clarifying the criterion of optimality (true risk) and its proxy (empirical risk), in the next section, we will move the learning paradigm – empirical risk minimization.

Given the training set \(S\) and a hypothesis class \(\mathcal{H}\), the empirical risk minimization of finding an optimal hypothesis \(h\) is defined as

As shown in the following example, if we can make a hypothesis space large enough, there is always at least one hypothesis that can make \(L_S(h)\) close to zero.

Example: Consider that 2-D classification problem at the beginning of this lecture, with an unconstrained hypothesis space \(\mathcal{H}\), there is always a hypothesis as defined in the following that can minimize the empirical risk to be \(0\) 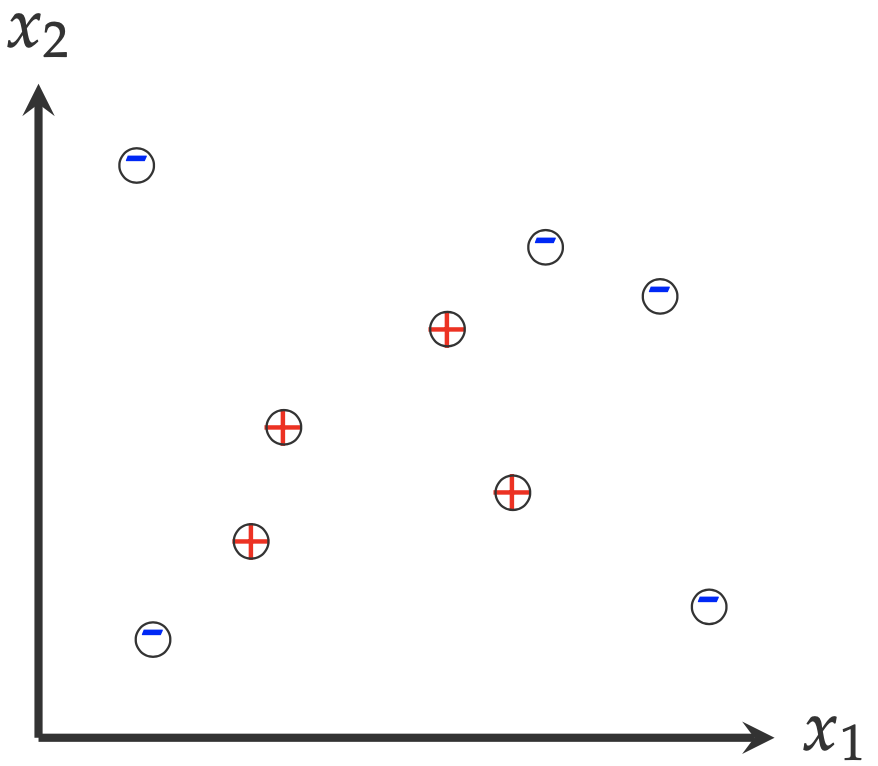 This example is just an illustration of one typical learning phenomenon, called overfitting. In machine learning, when a hypothesis gives (nearly) excellent performance on the training set but poor performance on the whole distribution \(\mathcal{D}\), we call this hypothesis overfits the training set. Recall the difference between empirical risk \(L_{\mathcal{D}, f}(h)\) and true risk \(L_S(h)\), overfitting means hypothesis \(h\) yields a big gap between \(L_{\mathcal{D}, f}(h)\) and \(L_S(h)\).

In a future lecture, once we have another way of measuring the capacity of hypothesis classes, we will introduce other strategies to solve the problem of overfitting.

To give a specific example of learning with finite hypothesis class, let us consider the following simple learning problem:

To answer this question from the perspective of machine learning, we have to pretend that we don’t know the ground-truth value of \( b \). In other words, our guess of \( b \) will only be based on the training set. The answer to the question mentioned above relies on two factors:

As we will see in the following example, even for a simple learning problem, learning the value \( b \) requires a perfect match between these two factors.

Example (1-D Classification, Cont.) Given the following training set with only eight examples, the simple algorithm \( A \) of enumerating all candidate hypotheses will identify the optimal hypothesis \( h^{\ast} = 0.2 \). Other learning algorithms with more time efficiency also exist, such as binary search. Whichever algorithm that we are going to use, with the training set \( S \) and the finite hypothesis class \( \mathcal{H}_{\text{finite}} \), it will identify the hypothesis \( h_2 \). This is exactly the labeling function \( f \). 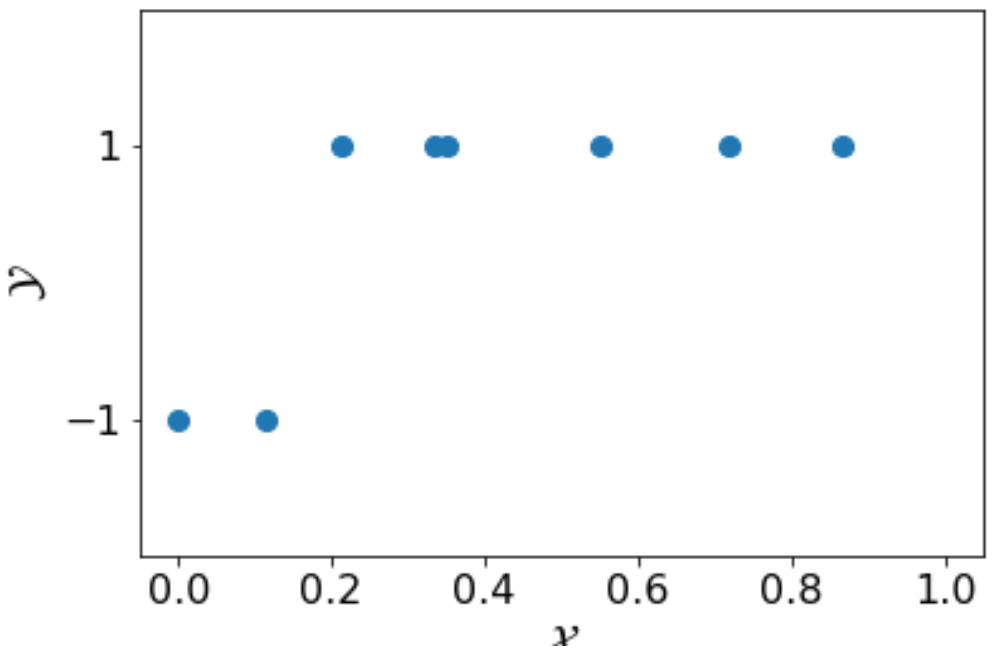 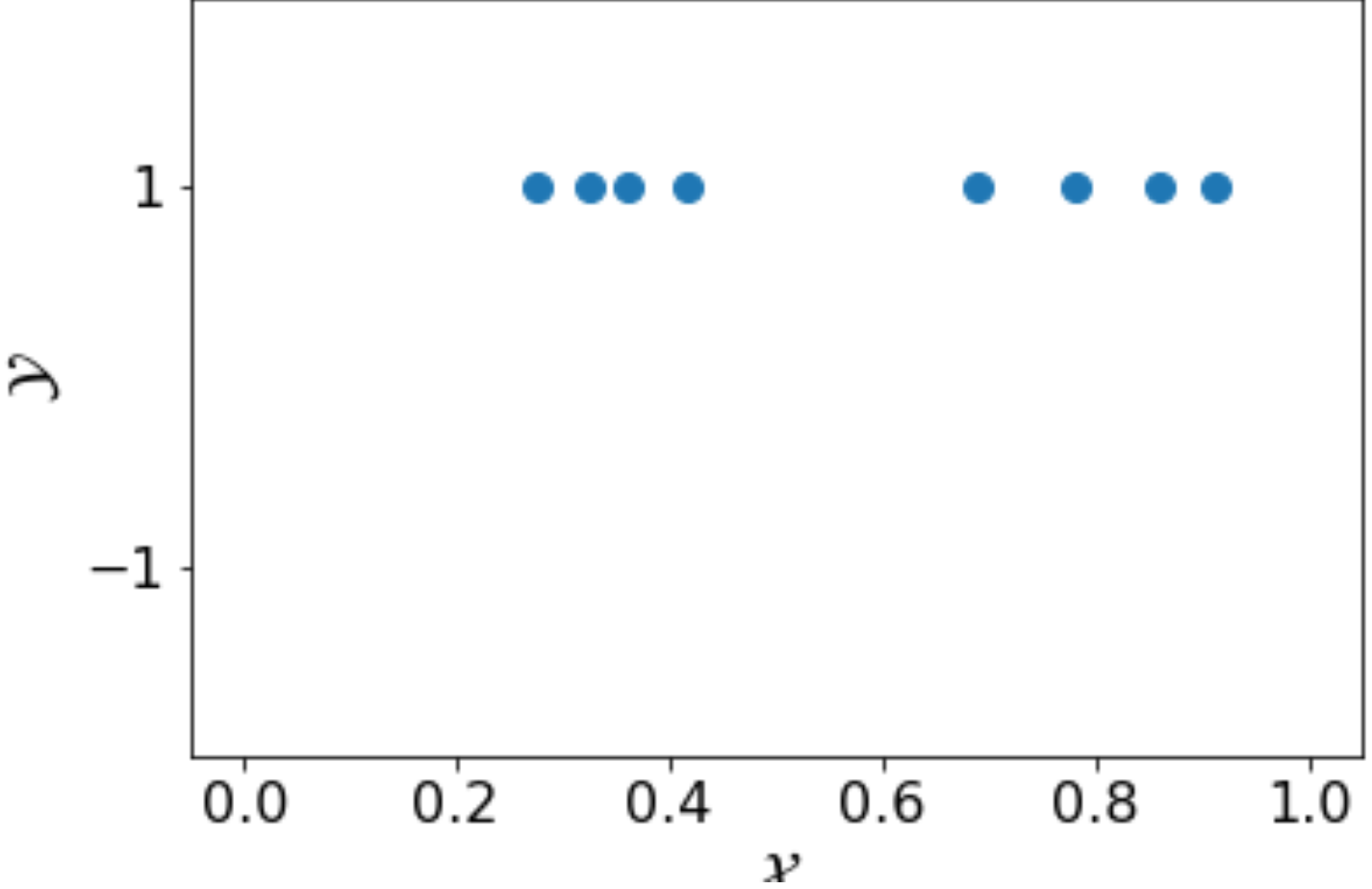 Furthermore, consider the following training set \( S’’ \), which again has the same number of training examples as in \( S \). 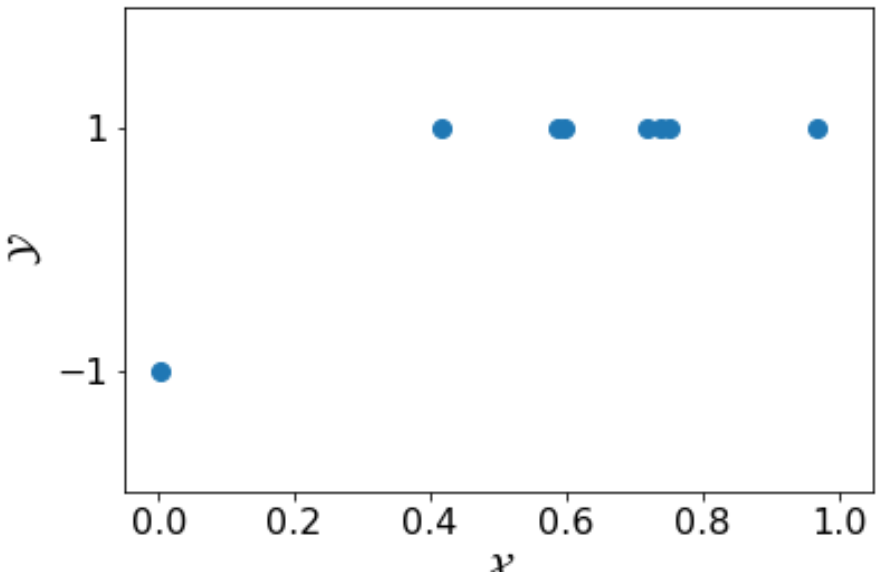 In this section, we use the example of learning with finite hypothesis class to demonstrate different situations that the learning algorithm may run into. As there is no guarantee that a learning algorithm can always find the ground-truth labeling function (even in a simple learning problem, as we demonstrated above), we need to relax the constraints and let the algorithm fail with a small probability (\( \delta \)) or find an imperfect hypothesis (with the true error less than \( \epsilon\)).

In the next section, we will use these two parameters to formally define learnability.

We will keep the realization assumption in the discussion of this section and remove it in the next section. Although it is a strong assumption, with it, we don’t need to worry about whether a hypothesis class is in the right size for the time being — at least it has a hypothesis \( h^{\ast} \) that can minimize the true error to 0.

Before we give the rigorous definition, let’s introduce a simplified version first:

Definition (PAC Learnability, Simplified) A hypothesis class \(\mathcal{H}\) is PAC learnable, if there exists a learning algorithm \(A\) with the following property:

with enough training examples, the algorithm returns a hypothesis \(h\) such that with a large probability, \(L_{\mathcal{D},f}(h)\) is arbitrarily small.

Here are some important pieces of information in this definition

With these explanations, now we can introduce the formal definition of PAC learning, which is nothing but describing the previous definition in a mathematical form:

Definition (PAC Learnability): A hypothesis class $\mathcal{H}$ is PAC learnable, if there exists a function \(m_{\mathcal{H}}: (0,1)^2\rightarrow\mathbb{N}\) and a learning algorithm with the following property:

if the realizability assumption holds with respect to \(\mathcal{H}, \mathcal{D}, f\), then when running the learning algorithm on \(m\geq m_{\mathcal{H}}(\epsilon, \delta)\) i.i.d. examples generated by \(\mathcal{D}\) and labeled by \(f\), the algorithm returns a hypothesis \(h\) such that

For finite hypothesis classes, we can calculate the sample complexity lower bound as (for the derivation of this lower bound, please refer to (Shalev-Shwartz and Ben-David, 2014; Corollary 2.3)

Given the size of a hypothesis class and specific values of \(\epsilon\) and \(\delta\), we can calculate the sample complexity lower bound as demonstrated in the following example

Example (Sample Complexity of 1-D Classification) With the following choices of \(\mathcal{H}\), \(\epsilon\) and \(\delta\):

we have \(m_{\mathcal{H}} \approx 691\). And here is one training set with 691 examples sampled with the labeling function (\(b=0.2\)). Without running a learning algorithm, it is clear that we can identify the boundary value very close to \(b\). 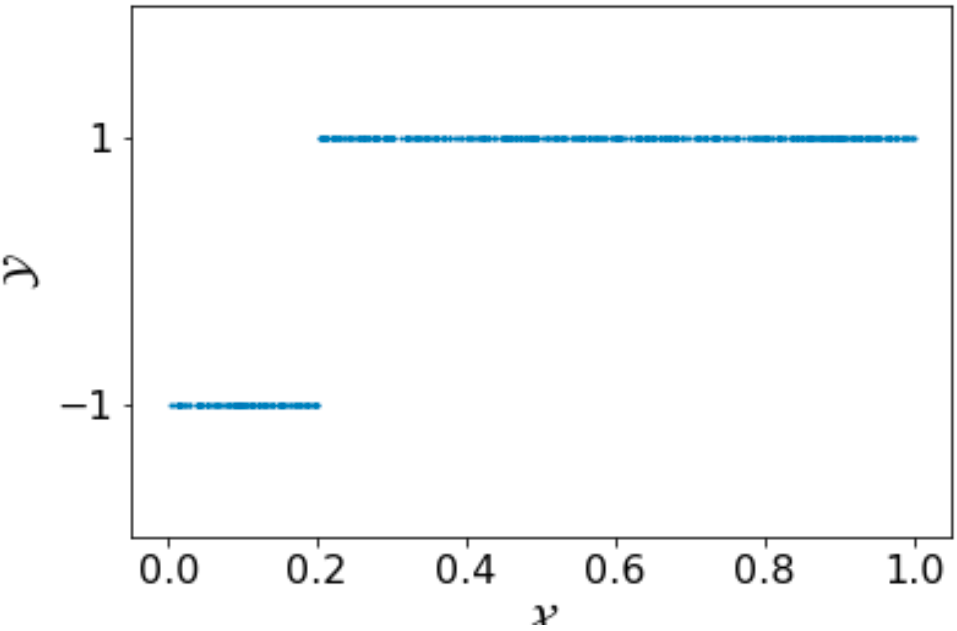 Of course, the discussion so far is under the assumption of realizability. In the next section, we will consider the PAC learning without this assumption.

As we discussed before, the Realizability Assumption is unrealistic in many applications. For example, in image classification

For the second case, considering the 1-D classification example. Assume the labeling function \(f\) exists with \(b=\frac{\pi}{4}\). Then, if we use the following hypothesis class

Therefore, the revised definition of true error is

and the revised definition of empirical error is

Note that, there is no essential change. The meaning of these two definitions remains the same.

Without the realizability assumption, the definition of agnostic PAC learning is defined as

Definition (Agnostic PAC Learnability): A hypothesis class \(\mathcal{H}\) is agnostic PAC learnable, if there exists a function \(m_{\mathcal{H}}: (0,1)^2\rightarrow\mathbb{N}\) and a learning algorithm with the following property:

when running the learning algorithm on \(m\geq m_{\mathcal{H}}(\epsilon, \delta)\) i.i.d. examples generated by \(\mathcal{D}\), the algorithm returns a hypothesis \(h\) such that